God works in mysterious ways, and even if you’re not a religious person, there’s no denying that there are certain situations and circumstances that go beyond reason. They have no logical explanation for why they happen, they just do!
The clip below tells an incredible story that seems to transcend rational explanation.
The story starts with a young man by the name of Walt Manis. Since he was a little boy, he loved spending time in nature, playing on his family’s100-acre property while looking at the beautiful sky and the beautiful trees that surrounded him.
He used that time to talk to God and confess his biggest dreams and most private thoughts. It was around that time when Walt started picturing how his daughter is going to look like, and a name came to mind: Chloe.
The name stuck with him, and Walt even began having dreams about how his daughter is going to look like. He envisioned a little girl with olive skin and dark eyes.
The story has another main character, and that is Annie. Annie was Walt’s first love and she ended up marrying him.
They both knew they wanted to start a family together, and when it was time for them to discuss having babies, Annie left Walt speechless when she told him that she has always love the name Chloe, and that’s how she would like for their baby to be named.
Still, because Annie is a blonde with light eyes, the chances of their child together being as Walt envisioned were pretty slim. And this is the part where the story really becomes unbelievable.
Without giving out the ending of the story, let’s just say this video is worth watching until the end. So take a look: 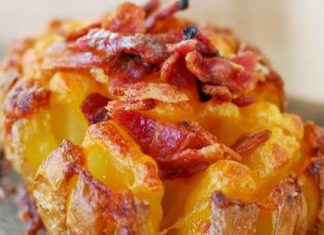 Cut your potatoes this way. The end result is a delicious...

fortherich - 13 July , 2017 0
Potatoes are without a doubt one of the most versatile (and delicious) ingredients ever. I don’t know about you, but as long as I...

He Died Right In Front Of The Finish Line! “He Loved...

Nurse Is Urging Every iPhone User To Make A Simple Change...