Two Australian men claim to own the oldest burger in the world. Casey Dean and Eduart Nitz were both just teenagers when they bought the burger 20 years ago. Apparently the burger was for a friend, and when the friend wouldn’t eat it, they decided to keep it. 20 years later, it still looks edible. “We are very confident that it is the oldest burger in the world. It started as a joke. I told our friend that we will keep the burger for him. Months passed and turned into years. Now, after 20 years, the burger looks just like the day I bought it, “told Casey. 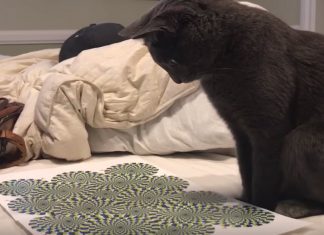 fortherich - 29 December , 2017 0
If you’ve ever had a cat, then you most likely know how curious felines can be. These creatures have a natural instinct to discover...

Shocking Social Experiment Shows How Easy It Is For A Stranger...

This Boy Saw A Sick Girl At A Hockey Game. What...