The International Primate Rescue in Pretoria, South Africa is home to more than 100 primates – but also two fennec foxes! Rupert the fox joined the sanctuary when it was just 4 weeks old. He’s now fully introduced to Roxy, one of their older female Fennec Fox, but she’s not Rupert’s only four-legged friend. The video below shows Rupert being reunited with his best friend, a cat named William. The two became best friends when the IPC staff was hand-rearing Rupert. Now how often you hear about a wild fox and a domestic cat that are best friends? This is amazing! 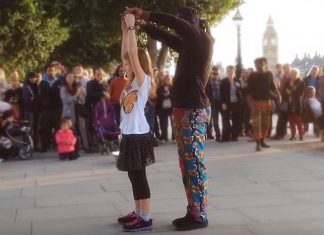 fortherich - 27 October , 2017 0
You’ll most likely agree with me when I say that not all street performances are created equal. Some are better than others, but it’s...

Parents Tell Kids They Ate All Their Halloween Candy

This Prank Leaves a Mark in the Pants! When a Raptor...