Formed in 1958, The Bee Gees deserve without a doubt a place in the pop music hall of fame. The trio consisted of brothers Barry, Robin and Maurice Gibb. Together, they were successful for most of their decades of recording music.
They released more than 20 studio albums and served as an inspiration for hundreds of artists, including Paul McCartney and Michael Jackson. In an interview, the King of Pop said this: “I cried listening to their music. I knew every note, every instrument.”
The Bee Gees officially retired from the music industry in 2012 after 45 years of activity. Barry and Robin decided to retire the group’s name following the death of their brother, keyboardist and bassist Maurice Gibb.
However, their musical legacy will always stand strong and will continue to inspire other artists.
To honor this legacy and pay a tribute to the Bee Gees, television channel CBS recently aired a ‘Stayin’ Alive: A Grammy Salute to The Music of the Bee Gees’ special. The event featured amazing performances by some of the most important artists of today, including 3-time Grammy award-winners, Pentatonix.
The group did an amazing rendition of “Too Much Heaven” that left the entire audience in awe. 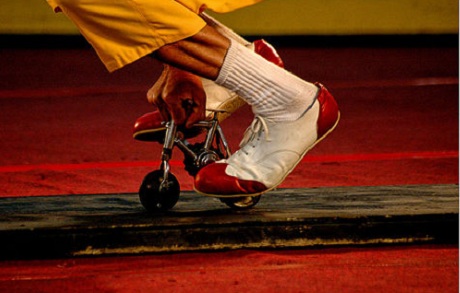 fortherich - 25 January , 2015 0
When people first see this bicycle, the immediately assume it’s just a toy, when in fact, it’s a worldwide praised creation. The man riding...

He Is The Boy Who Was Born With a Heart-Shaped Head!...

Over 20 years ago, Patrick Swayze and his wife gave a...