Most people shy away from the camera and do their best not to get in the shot whenever they see a T.V crew somewhere in public. Well, not this young lady! As soon as she sees the local news team shooting a segment, she slowly makes her way towards the camera and starts to fox her hair and makeup so that she looks perfect for the camera.
The crew at 7 Local News, which is a popular TV station in Queensland, Australia, noticed the girl, and even though they were broadcasting the segment live, they made the girl’s day by acknowledging her presence. The reporter interrupted his transmission about the subject they were covering and decided to give the girl some airtime.
Her reaction is just priceless! She clearly enjoys being the center of attention and most likely felt like a little celebrity when the reporter allowed her to say something to the camera.
The girl waved at the camera and said hello to her mom and dad before moving going on with her day. It might seem like a small thing for most people, but for that girl, it meant the world to be able to play in front of the camera, even if it was just for a little while! 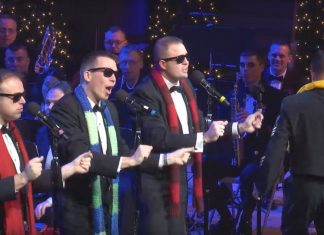 fortherich - 11 December , 2017 0
The United States Navy Band has a long tradition of being amongst the best military bands in the world. Based at the historic Washington...

A New Car Made This Dad The Biggest Fool During April...