Here’s something you don’t see every day: a plant moving like crazy, all by itself! According to the man who posted the video on YouTube, there was no wind to explain the way the plant was moving the day he shot the video. This is definitely weird; the plant appears to sway on its own! Apparently, there’s a logical explanation for this phenomenon that involves weak winds that are imperceptible to humans, but I just like to think it’s somehow alien related. It’s just more fun this way, don’t you think? Have you ever seen anything like this? I haven’t, at least not while being sober. 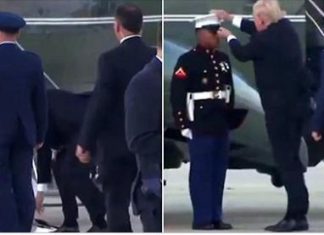 fortherich - 9 July , 2017 0
The video posted online shows how the US president is trying to help an American soldier who lost his hat because of very strong...