The students in the video below did something amazing when the plane they were in landed and they found out that the human remains of a fallen soldier were aboard the plane.
The students who are a part of a choir broke out singing “Battle Hymn of the Republic, ” and the entire special moment was caught on video by one of the passengers.
The students wanted to use their voices and the power of music to honor the fallen soldier whose remains were being escorted home by an Army private. The soldier was a World War 2 fallen soldier who recently was identified by his DNA.
Those who have made the ultimate sacrifice to protect the values and liberty of their countries deserve our utmost respect and our deepest gratitude.
These students’ gesture captured in the clip below was made out of their respect for their countries and all those who put their lives on the line to make sure we all live in a better world.
This is for sure the kind of video that deserves to be shared with others, so please take a moment to pass it along to your friends online. This is beautifully chilling! 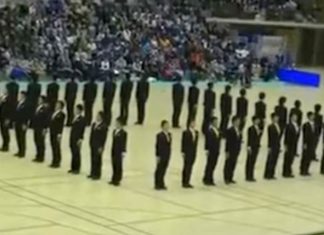 fortherich - 2 November , 2017 0
We’ve all seen those synchronized swimming routines where swimmers seem to defy the laws of physics with their incredible moves and abilities. But how...

Hate Mosquitos? This Easy Trick Will Stop Them From Ruining Your...