Such a moment, as in the video, inspires through its tenderness, naturalness and innocence that it sends. Any kid with real communication problems finds a way to interact trough simple gestures, which helps him get in touch with everything around him. Watching these images, we can say that all words are superfluous.
This boy has Williams syndrome, a rare disorder caused by the absence of certain genes. From the problems associated with this disorder, Williams syndrome, children do not know how to react in contact with people. We can not say the same for horses, around which the children seem to react as we would not have expected.
What could be more gentle and tender than a baby face glued to the horse, that gently responds and adapts to baby’s movements. The horse feels that the boy needs a friend and agrees without making the slightest movement.The baby is here the embodiment of an angel’s love and hugs are the purest evidence of unconditional love throughout the world. These images show us that between humans and animals can be communication, even without words.
On the outside, we are mere spectators to the spontaneous interaction between a child and an animal, but only they feel and live with intensity of the priceless moment. 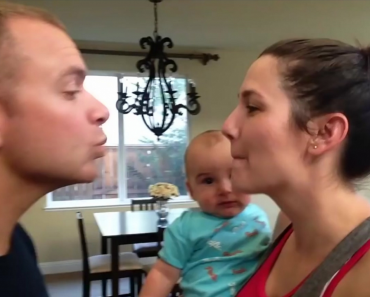 This Baby Has The Best Reaction When He Sees His Parents...

fortherich - 3 January , 2016 0
If you’re here looking for your daily dose of Aww…, then you’re in the right place! In the video below, an adorable baby has...

The Blaze Laserlight Is the Most Brilliant Road Safety Idea for...